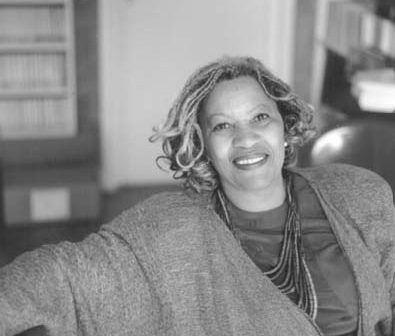 THIS GEORGETOWN FRESHMAN IS 63, AND ATTENDING THE SCHOOL THAT ENSLAVED HER ANCESTORS 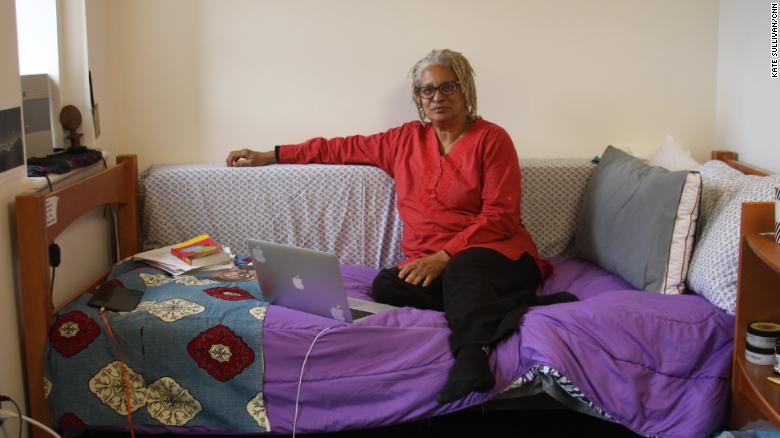 Washington (CNN)Mélisande Short-Colomb sits cross-legged on the purple comforter draped over her twin bed. She lives in the dorms here at Georgetown University, where she just wrapped up her first semester as a freshman.

Short-Colomb is 63. But that's not all that makes her different from her student peers.
Last year, she learned about her ancestors' ties to the university when she was contacted by a genealogist tracing the descendants of slaves that Jesuits at Georgetown owned almost two centuries ago. She had been working in New Orleans as a chef, but when Georgetown offered her and all of the descendants of the slaves a special legacy admission status, she decided to become a student again.
Like many college students, she has microwavable noodles, instant oatmeal, and a bag of chocolate chip cookies on her shelf. Her half-full french press is still warm, and a rocking chair sits by the window. Short-Colomb, who goes by "Meli," calls her room and adjoining bathroom in Copley Hall her "tiny condo." 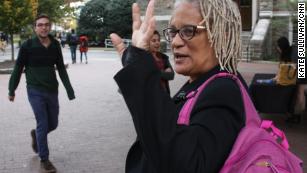 Georgetown University freshman Mélisande Short-Colomb
"I feel like an alien in a nice place," Short-Colomb said, laughing. She switches off NPR playing from speakers on her windowsill, and turns on a lamp to avoid using the harsh fluorescent overhead light. In an especially neat room, the walls are colorfully decorated with posters from different theater productions, and taking up most of the back of her door is a poster of the iconic 1968 Olympics Black Power salute protest.
"I love history, I love public speaking, I like theater," she said. She started off the semester "gung-ho" and enrolled in four classes, but then decided it was more manageable to drop down to three. These first couple of months have been about getting acclimated to campus, which, she said, hasn't been easy.
Short-Colomb walks to history class in her blue sneakers with a pink backpack slung over one shoulder. Her short gray and blond dreadlocks sway with each step. She smiles and waves to a few friendly faces, and a couple of students stop to say hello.
Getting to her History of the Atlantic World classroom a few minutes early, she slips into a desk in back corner and takes out her laptop and notebook. Most students are typing up notes on their laptops, but she prefers to take notes by hand, and every so often adjusts the brace she wears on her wrist to guard against carpal tunnel.
In 1838, Georgetown University was in financial trouble and sold hundreds of slaves, including Short-Colomb's ancestors, to pay off steep debts. The Jesuits of the Maryland Province, at the time the most prominent Jesuits in the nation, sold 272 slaves to plantations in Louisiana in exchange for what would be about $3.3 million today. The oldest person sold was 80 years old and the youngest was just a few months.
Over the past two years, Georgetown has taken several steps to make amends for its participation in the slave trade.
The university created the Working Group on Slavery, Memory, and Reconciliation, issued a formal apology for its slave trading, and renamed two buildings that had been named for priests and early presidents of the university who sold the slaves. President John. J. DeGioia also visited descendants in Louisiana.
"I don't think any institution can ever do enough to pay this incredible debt. But I do think that what Georgetown is doing is shifting in its thinking about its responsibility to the past, as well as thinking about its future differently," said Marcia Chatelain, an associate professor of history and African-American studies at Georgetown and a member of the working group.
"At the end of the day, what we're trying to model to the rest of the country is that institutions with power and privilege -- when they confront their history, they are actually stronger, they don't fall apart," she said.

Short-Colomb has four adult children and two granddaughters ages five and 10. She's a non-traditional student, as she describes herself, which poses its unique challenges. She hasn't joined any clubs, and doesn't go to parties.
"They aren't my peer group," she said.
"Physically, it's been challenging." When asked about what has been most difficult to navigate, she instantly quipped, "hills." She worries about her hips when makes her way back and forth on the campus that's aptly nicknamed "The Hilltop." And after catching a nasty virus the first weeks of classes, she avoids touching handrails in the stairwell and now sits with her back against the wall in class so that nobody can cough on her.
Professors have checked in with her to make sure she's doing OK. One was worried she might get harassed, but Short-Colomb says she hasn't experienced anything like that on campus. Everyone has been very nice and welcoming, she said. Her professors are working with her to figure out how to make this work, she said.
Short-Colomb also works 11 hours a week at the school library in the rare books section as part of her "work-study" financial aid program. She receives financial aid from the Georgetown Scholarship Program, and is also a grant recipient. Work is what she knows, she said, and she loves the familiarity of it. In an environment where everything else is new, she is very conscious about "setting small, accomplishable goals," so that she can build toward larger success at Georgetown.
Forty-five years ago, Short-Colomb went to college straight out of high school, but she didn't end up graduating. Now, after learning of her family's history, she feels a certain weight of responsibility being one of the first descendants enrolled at Georgetown.
It's important to her that people start telling the uncomfortable truths of wealth and accomplishment in the United States, "and how slavery was, and continues to be a foundation in that accomplishment," she said.
Adam Rothman is Short-Colomb's history professor and was also a member of the working group. Rothman said that even though Georgetown's history wasn't hidden or secret, and that historians on campus have known about it for a long time, "What was really striking was how few people were aware of it," he said.
In addition to Short-Colomb, there is another descendant of the 272 slaves in the same history class. As images of Haitian slaves are projected on the board, five seats ahead of her, Shepard Thomas initials the sign-in sheet being passed around. He is a sophomore transfer student from Louisiana State University.
Rothman said having both of them in a class that covers slavery, "is a reminder that it's not an abstract history and it's not a distant history, that it is our history-- the history of people sitting in the class. And that raises the stakes, I think, and makes people pay a little more attention."

'Those bricks were carried by members of my family'

Since finding out more about her ancestors who were sold and sent to Louisiana, Short-Colomb has been able to piece together her family tree and has met relatives there she never knew she had. She hopes that she will continue to find out more about her family during her time here at Georgetown. "I'm not here to live the 18- to 22-year-old experience. I'm here for a very specific reason ... to know more," she said.
"There are many African-Americans who have not had the opportunity to have this well-established paper trail in their lives," Short-Colomb said. But just because the papers don't exist doesn't negate the experiences, she said. Rothman and Chatelain have been working with many other scholars to compile the Georgetown Slavery Archive, and several descendants have come to campus to see the materials.
"I always want to see more curriculum around campus connected to questions of Georgetown's history of slavery," said Adam Rothman, who teaches the class. "To me, this history is too important to be confined to history classes -- I want to see it in theology, I want to see it in business," he said. "None of us in a classroom at Georgetown, or in the United States, is untouched by the history of slavery."
Every Sunday morning, Short-Colomb makes a little pilgrimage. "The campus is very, very quiet. Everybody's had a big Saturday night," she said. "I go over to the well in Dahlgren square, and I go over to Anne Marie Becraft Hall, and I go to Old North because those are all the oldest buildings on campus."
"Those bricks were carried by members of my family, and other families," she said. "I feel them here with me."
http://www.cnn.com/2017/12/25/politics/georgetown-freshman/index.html